Today is my last day here at Pt England School. It has been an honour and privilege working here for the past 11 years. I have loved working with amazing staff, team and children. Thank you Pt England, I will miss you. Thank you everyone who commented and helped me throughout my journey. God bless. Love Priscilla Lavakula


End of an Era from Priscilla Lavakula on Vimeo.
Posted by Unknown at 12:56 PM 2 comments: 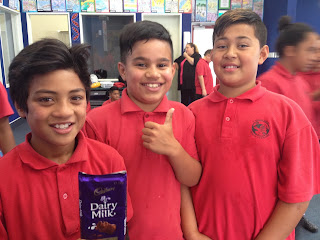 It was our second to last day at school and we decided to have some fun. Our first game was the chocolate game. There were two plates with a cake of chocolate and forks and knives on each. Children had to roll a six and put on three items: one on their head, one of their face and one on their bodies. If there were already two children changing and another person rolled a six then they had to tap one out and start putting on their costumes.

The second game we played was the Balloon Stomp game. Each child was given a balloon and had to blow it up. They were given a piece of string and tied one end to the balloon and the other end to around their ankle. When the teacher said go, each child could run around and stomp on another person's balloon. Once your balloon is popped, you were out. The last person with their balloon still inflated and around their ankle was the winner. We had two winners yesterday: Kurtas and Simon but they were so good to include Noah as well.

Posted by Unknown at 8:24 AM No comments: 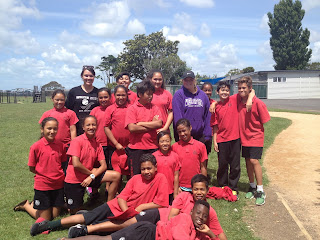 Over the last six weeks we have been learning about softball. We've had two coaches come and teach us skills of how to play. Thank you Miss Va'afusuaga and Kiwisport Auckland for teaching us. We love softball.

Posted by Unknown at 9:00 AM No comments:

Last week on Thursday, our school had Senior Prizegiving. All children in each year group are to share an item. Here is the year 6 dance item.

While the year six children were away at Camp Bentzon on Kawau Island, the year five children got to do some baking. Here is a short clip of what we got up too.

Baking from Team 4 Pes on Vimeo.

Posted by Unknown at 9:00 AM No comments:

Today we had our annual school picnic at the Pt England reserve. We had to postpone it twice earlier in term one because of the weather. We weren't too sure today about the weather because it was overcast. But from 12pm today, the sun came out. It was a great day and we all had a great time. Here is a short clip of some of the things we did.

Posted by Unknown at 3:34 PM No comments:

For the remaining weeks left of school, our class have been learning about cricket. Our coach is teaching us skills to play the game first. Here is a short clip of us practicing our bowling. We need to keep our arms straights and it has to be an overarm bowl. We are trying really hard to hit the wickets with the ball.

Our school is in the process of having a brand new bike track made for us. The track is set around the outside of our school field and also goes around the junior and senior playground. It has been so much fun watching the men making it, hard at work. Our children have loved running over the dirt piles too. We can't wait till it's finished so we can ride our bikes on it.

Posted by Unknown at 1:05 PM No comments:

For the next four weeks, we are going to be learning about Softball. So far, we have learned about the different bases. A reminder for us is to make sure we touch the bases with our foot when we run around them. We also practiced our aim by throwing the softball and trying to hit the bat. Here's a short snippet of what we have done so far.

This term for Maori with Whaea Saf, we have been learning about a pepeha (which is a Maori mihi) that identifies not just Maori people but all people and where they come from. It helps people to recognise and make connections when they listen to people share their pepeha. We've also started learning a waiata. Do you recognise the tune?

Posted by Unknown at 9:13 AM No comments: 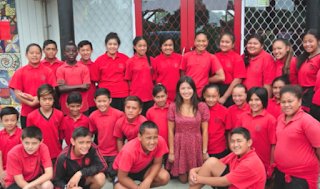 Last week on Friday, it was a farewell / "see you later" to Miss Clark. She has taught in Year 7 and 8 for the past three years and is off to work in a different career path altogether. We will miss her and wish her all the best for the future. Here is a short snippet of our senior children singing a waiata (song) for her during assembly.

Posted by Unknown at 9:08 AM No comments: 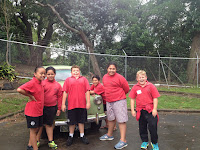 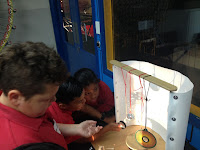 Do you know what MOTAT stands for? MOTAT in Auckland, is the Museum of Transport and Technology. Our inquiry is called "Ch-ch-ch-ch changes" and it is all around Science and the Material World. We went to learn more from their programme called "Bust that Myth". Some of the myths included: You can turn a cup over without spilling water and Electricity cannot flow through people like wires and many others. Throughout the day, we got to explore and look at other exhibitions like: telecommunications, the Village, the Big Machine and the Get Smart space. It was a lot of fun even when the weather wasn't great and we learned a lot too. Thank you to Abby and her team from MOTAT who looked after us while we were there.

Year 6s are off to Camp!

Every year our year 6 children go off to camp at Kawau Island. They travel north, by bus to Sandspit and catch the ferry to Camp Kawau. We're very blessed to have parent helpers go along to help keep everyone safe.

The children will take part in different activities like: kayaking, sailing, swimming, hiking, building bivouac's, a burma trail and more. We hope that they are safe and that the weather is sunny and warm for all of them. All campers will return on Friday afternoon. 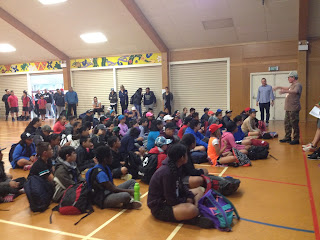 We have been very blessed this term to have coach Lewis come and teach us skills and how to play the game of touch rugby. Children got to practice how to play the ball, run over it and then move to the side and back. They also got to play attacking and defensive games as well working with others.
We'd like to thank coach Lewis and his dad who came and took us during these sessions and Miss Va'afusuaga for organising this for us. 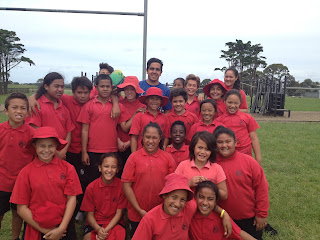 Posted by Unknown at 4:34 PM No comments:

Today was our annual school athletics. The weather forecast was to rain but we were very blessed that it didn't. Thank you Miss Va'afusuaga for organising yet another successful school event. Thank you to all Spark helpers that volunteered and all parents and ex students of Pt England who came and helped out today too. Here is a small snippet of the year 6 boys at Tug of War.

Posted by Unknown at 3:06 PM No comments:

This year for the Manaiakalani Film Festival, our class looked at New Zealand artists and their songs. We looked at the lyrics and the music videos. Thank you to Justus and Skye for hosting this movie and David and Bryana for presenting our movie today. Please leave us a comment.

PES Lavakula Manaiakalani Kids got Talent from Team 4 Pes on Vimeo.
Posted by Unknown at 8:47 AM 34 comments: 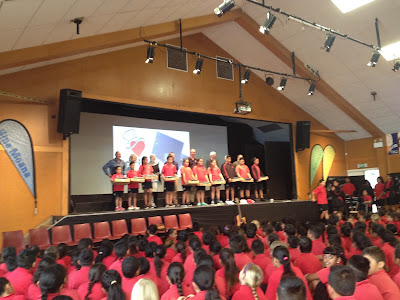 During assembly we also had an ex student Tanielu Tele'a come and speak to the children about some of the things he has achieved and got up to while here and what he has been up to so far. We are all very proud of him. Tanielu is also Justus' big brother and he came and sat with him for a bit this morning in class. 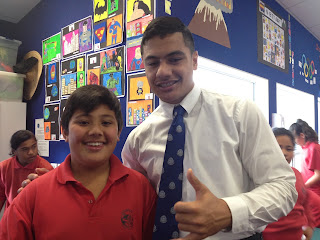 Team 4 have an important value for children to learn alongside respect. We have been talking about 'Gratitude' and what this means to us and what it would look like to others. Here is a short movie about what some of our children think gratitude is and what they are grateful/ thankful for. Thank you to all the children that helped make this movie.


Gratitude from Team 4 Pes on Vimeo.
Posted by Unknown at 4:08 PM 4 comments: 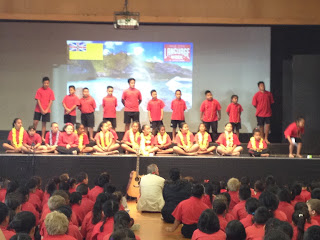 To finish off the week, our Niuean group performed an item for the whole school during assembly. Mrs Lagitupu quizzed the children on some words that we had shared on PENN News through the week. We had visitors from the Manaiakalani Trust come and speak to us as well as our new police constables for the Glen Innes area. 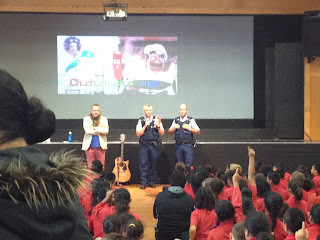 What a wonderful way to finish the week. Fakaaue lahi and thank you everyone for supporting us. We would especially like to acknowledge the Tusini-Rex family for their song Koe tau Tau Loga kua mole ki Tua. We love our culture! To find more resources, click here.
Niue Group item for Niue Language week 2016 from SchoolTV on Vimeo.
Posted by Unknown at 8:18 AM No comments:

Fakaalofa lahi atu kia mutolu oti. Greeting everyone! It's Niuean language week. Here is a movie of some of our children teaching you how to say the days of the week in Niuean.